It is well known that women tend to console themselves with a piece of chocolate. The work of Erik Hrabovszky and his team could help to find a cure for infertility, the biggest sorrow for many women, by unravelling the role of a peptid named after a chocolate.

While continents and huge countries are doing everything from education to regulation to legislation to combat the continuing rise in population, in a far from happier but definitely richer part of the world, more and more people are struggling to have children. There are a thousand and one reasons why they have to struggle. Although endometriosis, with its painful symptoms, is probably the most commonly known nowadays, polycystic ovary syndrome (PCOS), where overstimulated ovaries are the cause of infertility, is also a frequent reason. These two - unfortunately common - conditions are also among the puzzles to be solved in the broad field of fertility research.
But let's talk more about this with Erik Hrabovszky, an international authority on neuroendocrinology, whom we spoke to in connection with their paper in the prestigious PNAS*.
According to the introduction on the journal's website, the papers published here "present original research of exceptional importance".
To submit an article, you can either submit it if the authors believe that their paper is of exceptional merit and therefore worthy of their own submission, or you can submit it in collaboration with an academic member, following the rules. The Eriks' article has several authors, but none are NAS members.

- Let's start perhaps with what neuroendocrinology is!

- Neuroendocrinology is a relatively young discipline that deals with the bidirectional functional relationship between the brain and the various endocrine glands.

- What does "relatively young" mean in the case of neuroendocrinology?

- The mid-twentieth century, the 1950s and 1960s of the last century - and, in many cases Hungary. Even today, at international conferences, the achievements and traditions of Hungarian neuroendocrinology are widely known and recognised abroad. It would be difficult to list briefly the fundamental discoveries of the last century that the world owes to the Hungarian neuroendocrinological schools. Even from behind the Iron Curtain, the results of János Szentágothai's working group caused a sensation worldwide. Such as Béla Halász's ingenious experiments in orbital transection with the "Halász knife", named after him. By applying it, long before the discovery of "releasing" and "inhibiting" hormones (neurohormones) regulating the pituitary gland, they were able to successfully delineate the hypothalamic areas regulating the anterior pituitary lobe, the so-called "hypophyseotrophic" regions, and to describe the small-cell neurosecretory systems regulating them.
In Pécs, in 1957, some three decades before the identification of the oestrogen-sensing receptor, the implantation experiments of Béla Flerkó and János Szentágothai were the first to demonstrate that ovarian oestrogen hormones also had a feedback effect on brain function.

- How did they demonstrate this?

- They implanted ovarian tissue in the hypothalamic region, and the remaining estrogen secretion from this tissue reduced the secretion of the pituitary gonadotropic hormone!
The phenomenon can now be easily interpreted as a classic negative estrogen feedback, partly due to estrogen inhibition of the secretion of hormones by the reproductive regulating GnRH (gonadotropin-releasing hormone) neurons. A similar negative feedback is also inevitably present in other hormone-producing glands regulated by the hypothalamus.

- Can you give some examples?

- Thanks for the examples, and let's get back to the GnRH neurons that control reproduction. What do we know about them?

- Also in Pécs, but already in the eighties, the immunohistochemical work of István Merchenthaler and Zsolt Liposits contributed significantly to clarifying the anatomy of these neurons. At that time, GnRH neurons did not appear to have a receptor capable of detecting estrogen levels. Therefore, research in the following decades has focused on the study of systems that contain an estrogen receptor and may be related to GnRH neurons.

- Professor Zsolt Liposits has been working at KOKI for several decades!

- That's right. Along with his students, Imre Kalló and Csaba Fekete, my colleagues, they have already continued their experiments here, identifying several cell types with estrogen receptor feedback.

- What is the function of these estrogen receptor-containing neurons and how do they interact with GnRH cells?

- The levels of estrogen hormones circulating in the blood fluctuate during the sexual cycle, causing cyclical changes in the function of estrogen-sensitive neurons. While several types of estrogen receptor-containing neurons form direct contacts with GnRH neurons, of particular importance are those that produce a peptide-like transmitter substance, named kisspeptin in reference to the most famous product of its discovery, the Pennsylvania chocolate maker Hershey.
It is now believed that the main effects of estrogen are mediated by these kisspeptin cells to GnRH neurons containing the kisspeptin receptor!

- So estrogen acts mainly indirectly, through kisspeptin, on GnRH cells?

- This is, with considerable simplification, correct. However, I note that in 2000 we showed that certain estrogenic effects can reach GnRH neurons directly, via the so-called beta-type estrogen receptor. Furthermore, complex biological processes such as reproduction would be very vulnerable if nature did not provide some parallelism. What can be said, however, is that genetic mutations affecting the kisspeptin or its receptor result in a lack of puberty and reproductive capacity that other systems mediating estrogen feedback cannot compensate. Of particular interest in the estrogen-dependent regulation of GnRH neurons is the ability of estrogen to both stimulate (positive feedback) and inhibit (negative feedback) GnRH neuronal function depending on the phase of the sexual cycle.

- The system is undoubtedly effective and there is certainly a good reason why estrogen does not act directly on GnRH cells. Are the same neurons responsible for negative and positive feedback?

- The negative feedback that occurs for most of the cycle is mainly due to the kisspeptin neurons in the nerve nucleus called arcuatus. Our paper, first authored by Balázs Göcz and published in PNAS, revealed the molecular mechanisms underlying negative feedback.

- What have you discovered?

- The article provides a comprehensive picture of the genes and functions of kisspeptin neurons under estrogen regulation. The backbone of the work is a high-throughput gene expression assay, next-generation RNA sequencing.

- This technique has been used in your work published in eLife a few months ago. Could you describe in a few words how such a study is done?

- In our experiments, we have individually excised and collected fluorescent kisspeptin neurons from the nerve nucleus of a genetically modified mouse arcuatus using laser capture microdissection (LCM). By comparative analysis of mouse models with low and high estrogen levels, we identified about 2300 estrogen-dependent genes.

- A huge number! And what processes are regulated by these estrogen-regulated genes?

- For example, many of the regulated genes were associated with processes such as autophagy (N=156) and ubiquitination (N=45), which have been much talked about recently in relation to long and healthy lives, while the appearance of 126 estrogen-regulated receptors suggested that the neuronal neurotransmitters serotonin and somatostatin, and the neuropeptide orexin, affect the function of neurons in an estrogen-dependent manner, among other systems.

- How have you demonstrated this?

- We have also detected axon terminals of these transmitter systems on kisspeptin neurons using light and electron microscopy.

- That must have been good work too, hats off! Were there any surprises in the results?

- One interesting new finding was the strong estrogen dependence of serotoninergic regulation of kisspeptin neurons, which has not been studied before. High estrogen levels decreased the levels of three stimulatory serotonin receptors while increasing the levels of one inhibitory receptor. Imre Farkas also demonstrated by electrophysiological experiments that in the presence of high estrogen levels, the stimulatory effect of serotonin on kisspeptin neurons is significantly reduced.

- Were there any results not mentioned so far that might be of particular importance in the future?

- The sequencing data have identified a number of estrogen-dependent genes that have been previously implicated in clinical pathologies affecting puberty and reproduction. The genes encoding kisspeptin Kiss1, neurokinin B encoding Tac2, or neurokinin B receptor encoding Tacr3 are not only characterized by strong estrogen-dependent regulation, but their congenital defects also cause the absence of puberty in humans, "hypogonadotropic hypogonadism".
Based on our gene list, we have identified rare variants of potential disease-causing genes in human patient material in collaboration with a Swiss clinical genetics group. Of course, the actual pathogenic role of these genes needs to be confirmed by further studies, as the burden analysis methodology used only refers to statistical probability.

- Even if this is only a statistical probability, it is clear from what has been said so far that these experiments do not conclude this research project! Where to go from here?

- One interesting direction is the differential regulation by oestrogen of the two main groups of kisspeptin cells responsible for positive and negative feedback.
Balázs Göcz and Miklós Sárvári will soon complete a manuscript that will compare the estrogen-dependent processes and genes of the preoptic kisspeptin cell group activated during positive estrogen feedback that triggers follicle rupture (ovulation) and the arcuate nucleus kisspeptin neuron population responsible for negative feedback. In particular, it is exciting that the same estrogen level induced opposite expression changes of 34 genes in the two cell types.

- No question that it is worth pursuing! You have the tools, you have skilled and enthusiastic collaborators, but do you have the grant money?

- Yes! One of the genes that is inversely regulated by estrogen in the two kisspeptin cell groups is Vgf. And last year we were awarded an OTKA grant to study the role of Vgf in reproduction. Based on our results so far, it appears that small peptides cleaved from Vgf, similar to kisspeptin, play an important role in both positive and negative estrogen feedback.
In addition, gene expression studies of kisspeptin in neurons can be used to investigate exciting questions such as the precise mechanism of the reproductive inhibitory effects of starvation or high prolactin levels.
I should also add that excessive activity of the kisspeptin neurons in the arcuate nucleus plays a key role in the development of PCOS, which affects up to 10-20% of the female population, as mentioned in the introduction. A further important medical implication is that abnormal increases in the activity of these same kisspeptin neurons are also responsible for the hot flushes that so many people experience during menopause.
The observations on the gene expression pattern of the estrogen-deficient mouse model are therefore of clinical interest in the PNAS article by Balázs Göcz.
In addition, we would like to publish the sequencing methodology used in this article!

- The topic seems to be a real goldmine for you!
However, many of the authors of the PNAS article have not yet been mentioned. Could you at least name those who have done the most to make this significant discovery and success possible?

- A significant part of the results is due to the colleagues of the Reproductive Neurobiology Laboratory, Balázs Göcz, Eva Rumpler, Miklós Sárvári, Katalin Skrapits, Szabolcs Takács, Imre Farkas and Sarolta Trinh. And the high number of co-authors shows how much valuable help we have received from in-house and external collaborators. 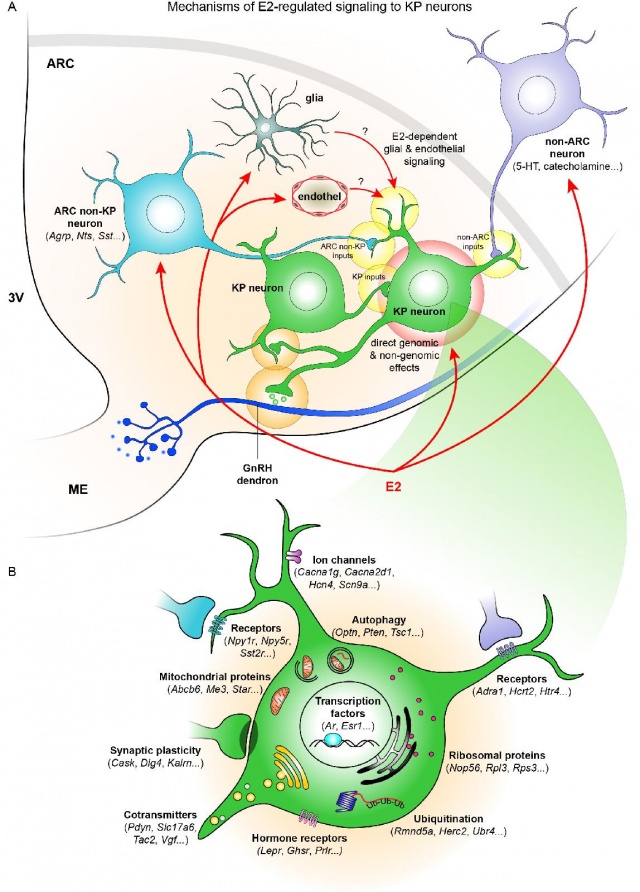