Neuroimmunology is one of the most promising areas of research in neuroscience today. An article by Ádám Dénes and his research team in Cell Reports explores the relationship between microglia and neurons and its importance in the developing nervous system.

This saying, whether or not it comes from Socrates, may come to the mind of a modern researcher when confronted with results that contradict all the dogmatic tenets of his field of research, or, as they say in the art world, "are not in the canon". Fortunately, such 'canons' are not set in stone in science either, and this is one of the main drivers of scientific discovery.

Just think, not so very long ago, what was the main topic of neuroscience research in most of the articles published? Nerve cells and the connections between nerve cells, of course. Although there are still many unexplored questions, some of the most striking publications today are those on the relationship between neurons and other cells in the nervous system, and the role of inflammatory follicles in neurodegenerative diseases is increasingly recognized.

One of the most promising new areas of research is neuroimmunology, the main research topic of Adam Dénes and his Neuroimmunology research group. Their paper, just published in Cell Reports, also presents a surprising discovery, which is demonstrated by the high-level use of the laboratory's technical arsenal. Ádám Dénes, Csaba Cserép, and their Ph.D. student Anett Dóra Schwarcz (Netti) talk about the work.

- Let's start with what neuroimmunology is and what led to the results we have today!

- A good decade ago, it was almost sacrilegious to talk about the fact that immune cells, however "native" to the central nervous system, such as microglia, play a major role in the regulation of many neurological processes. I was very interested, for example, in why we feel sick when an infection attacks the lungs, or what cleans up the remains of the dead cells that are produced in large numbers in the developing nervous system. It turns out that in both cases complex neuro-immune interactions are at work. There were previously no adequate imaging, genetic, or molecular anatomical methods to investigate such questions. Recent advances in technology have both revealed the importance of neuro-immune interactions in the functioning of the nervous system and generated a host of new questions. For us, the study of microglia-nerve cell interactions has come into our field of vision. The importance of this is that a growing number of studies are showing the role of microglia in the development of almost all neurological diseases. These include so-called developmental neurological diseases, such as ADHD or autism, in which neurological symptoms can be shown to be caused by abnormalities in the development of the individual. The pathogenic factors of these diseases include inflammatory processes and alterations to the immune system.

- In recent years, we have shown that microglia, which are the main immune cells of the central nervous system, also perform a number of essentially non-immunological functions. These include, for example, modulating nerve cell activity or brain circulation. It was previously thought that microglia could interfere in the life processes of nerve cells mainly through their connections with synapses. However, we have recently demonstrated that microglia also regulate neuronal activity and the fate of damaged neurons through very specific cell-cell contacts that are formed between microglial extensions and the cell body of the neuron. The reason for this paper was that microglia-dependent effects in the developing nervous system - such as the clearance of dead cells, cell division, migration of neurons in the developing cortex, or their integration into a particular cortical layer - are present even when synapses are not yet present. On this basis, we hypothesized that the somatic microglia-nerve cell relationship observed in the adult brain, or similar may exist in the developing nervous system. From there, we just had to see if we were right.

- And the experience of István Katona came in handy!

- István, Zsolt (Lele), and Zsofi (László) have been working together for a long time, and we can work together very well and efficiently. This has already been proven in the previous Science study, and in the current work, we have benefited a lot from the joint thinking and the developmental biology and methodological knowledge provided by István, Zsófi, and Zsolt.

- In this work, the P2Y12 receptor (P2Y12R) also plays an important role, and in P2Y12KO mice, damaged cortical cell structure was observed. Such mouse strains have existed for decades and have been used in a large number of experiments. Why haven't others looked at this, what was the reason that no one has described it so far?

- The right context is important here. The P2Y12R KO mouse was first used in platelet research because ADP sensed by P2Y12R is an important player in blood clotting processes - this is well illustrated by the extensive use of P2Y12R inhibitors in the clinic. Only recently has the focus shifted towards microglia. In the brain, P2Y12R is normally present only on the microglia and is required, among other things, for the microglia to sense sites of ATP release. This is important because ATP at low concentrations is one of the brain's main communication "currencies" for coordinating cellular activity, which is very quickly converted to ADP outside the cells. It came as a surprise to us when we previously discovered that microglia use P2Y12R to form the connections through which they regulate neuronal activity in the adult brain. From there, we turned back to the developing brain and started to look at the development of the cortex and the location of the adult cortical layers. In the developing brain, a myriad of more or less redundant mechanisms is available to circumvent the consequences of developmental disorders or certain genetic defects. Despite this, we have seen remarkable lesions in P2Y12R KO mice, indicating that this microglial mechanism also has an important developmental role. The recognition of the role of P2Y12R, moreover, was partly down to luck. Even before I came home from England, I had already made it a priority to use the molecular anatomical knowledge built up in KOKI to study neuro-immune processes. When Csabi contacted me to say that he would like to join the group, we were in the process of analyzing the first super-resolution microscopy images of P2Y12R apparently forming small bundles on microglial extensions as they touched the cell bodies of nerve cells. There was no question that electron microscopy would follow. Then, finally, electron tomography made a major breakthrough, and, with Csabi's help, we were finally able to visualize the ultrastructure of microglia-nerve cell contacts in three dimensions, something that had not been previously investigated using such a method.

- Your articles are characterized by virtuoso use of the microscopes available at the institute, and your results are not only significant but also an aesthetic delight. The microscopy toolbox is vast, and many techniques are not easy to learn or apply.

- About six months after I joined Adam's group, we went to the 2017 Brain&Brain Pet Meeting in Berlin. Browsing through the posters and presentations, I was very surprised how little the high-resolution anatomical methods that are commonplace - almost mandatory - elements in most basic neuroscience research were used to study microglia. It was therefore particularly effective that we managed to build up very quickly a fairly strong 3-dimensional anatomical methodology branch within the group, with a repertoire ranging from confocal laser scanning imaging to electron microscopy and transmission electron tomography. However, in recent years, there has been strong competition from the use of advanced anatomical methods in research on neuroimmunological or microglial processes. In order to stay at the forefront, we need to continuously improve our methodological palette, and we have had to start using STED super-resolution, fluorescence labeling of ultrathin sections after embedding, or 3D scanning electron microscopy methods.

- Correlated confocal laser scanning transmission electron microscopy and transmission electron microscopy were used to study the direct somatic connections between developing neurons and microglial cell protrusions. This is a major methodological challenge, but worthwhile because it enables us to simultaneously visualize the ultrastructural features of microglial-neuron interactions identified with fluorescent tracers. In this way, the formation of direct membrane-to-membrane contacts or the precise location of organelles (cell bodies, cell organelles) such as mitochondria near cell-cell contacts can be verified. Correlated methods of analysis are relatively less common in the literature due to the technical difficulties that arise, which I was highly motivated to overcome. I made countless maps to find back the exact same cells selected in the confocal images. When we finally managed to identify them, I felt like I had found the treasure from the pirate map!

- Even a technical question. A few years ago they introduced what is called the graphic abstract, which is basically a poster-drawing summary of the main message of the works. All your diagrams are very nice, this graphic abstract is very nice. Obviously, their preparation requires a special skill. How do you do it?

- Basically, we are all visual types, we never pass by a nice microscopic picture without a word... If someone finds an interesting scene, we gather in front of the monitor and enjoy the visual experience together. J And in this environment and with this material, it's not that difficult to make good images! Of course, you also need a sense of visual communication and some experience with image editing software. The graphical abstract is, I think I can speak for the others, a very good innovation, it is a very effective way of conveying the central message of the study.

- I agree with this myself, but I would ask you to summarise verbally the "message" of your work that has just been published.

- In the current study, we have succeeded in demonstrating that during both embryonic and postnatal development and neurogenesis in the adult brain, a relationship between microglial extensions and the cell body of immature, developing neurons is present that is very similar to the somatic junction already described in the adult brain. Here too, communication between the two cells is P2Y12R-dependent, and the smooth functioning of this signaling pathway is necessary for the development of the normal cortical structure.

- An important contribution to understanding the message of this article is that a number of mutations affecting microglial proteins have developmental consequences and effects on neurogenerative processes in the adult brain. These relationships are only beginning to be understood - including from GWAS (genome-wide association study) studies. These focus on how point mutations at specific stages of specific genes are associated with the development of certain neurological diseases in the clinic, such as Alzheimer's disease. And while it has been known for 20 years that mutations in this particular gene are a risk factor for Alzheimer's disease, stroke, or certain developmental neurological diseases, it is beginning to emerge that the gene itself is expressed dominantly in microglial cells, not in neurons! This is why it is essential to apply new approaches and methods in neuroscience research and to understand that the protection of the state of nerve cells cannot be imagined without the protection of the microenvironment and the cells that provide it, which are essential for their functioning.

<< Why is it important to understand the brain's reward system?
Csaba Cserép had been elected a member of the Young Academy of Europe >> 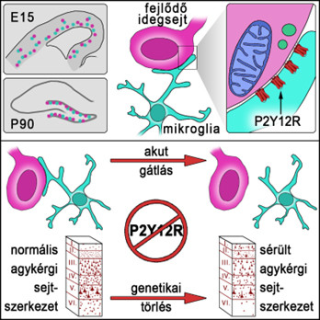 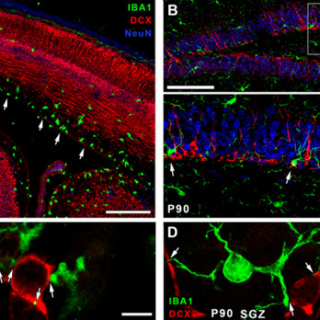