Várgesztes Villapark, located near the small village of Várgesztes in the Vértes Hills, hosted the KOKI scientific event for the second time. The resort has excellent facilities, but we were equally satisfied with the quality of the symposium.

Probably every research institute - and one that cares something about itself - has an event where the speakers and the audience are members of the institute, who, while rooting for each other and enthusiastically acknowledging excellence, can also ask some very serious questions. Some of these may sometimes make the presenter sweat, but they can be a great help in continuing a project and evaluating the results from a new perspective. Such in-house events are only open to a few carefully selected, distinguished guests, who can not only gain an insight into the latest results of ongoing research projects, but also get an idea of the research community and the preparedness and motivation of young researchers.

Among the members of the KOKI Scientific Advisory Board, Prof. Barry Everitt (University of Cambridge, UK) and Prof. Angus Silver (University College London, UK) were the ones who were with us in Várgesztes and performed their requested tasks to the highest level. Not only did they listen to all the presentations, but they also asked questions to each speaker, which is a remarkable achievement considering the variety of topics and the number of presentations! Alongside them, the President of the MTA, our former Director, Tamás Freund, was also an active participant in the post-lecture discussions, which in several cases contributed significantly to a deeper understanding of the lectures and to the assessment of the knowledge and understanding of the speakers.

Two of the original program speakers were unable to attend, but 14 of the 29 presentations were given by PhD students. For at least 15 years, KOKI has been required to give presentations in English at similar events, which was audibly no problem for them, nor was understanding and answering the questions they were asked. This is also an improvement on the event only 10 years ago, although our previous Advisory Board members who were native English speakers were already satisfied with this.

So the audience was satisfied, but how did our young speakers feel?

- I like performing, I feel good before, after and during. Of course, you always feel relieved afterwards. I wasn't too nervous because the atmosphere was friendly and I'm used to public speaking anyway.

The hardest thing is always time, and 10 minutes to present a more complex piece of work is not very long. My thesis supervisor (Balázs Gereben) was very pleased with me and I received a lot of praise. I have never performed for such a large audience abroad, but here it is perhaps a little easier because we are not strangers to each other.

László Szente, who is younger than him, was not so relaxed.

- On the morning of the performance, I was waiting for my turn with complete calm, but before the performance I was quite nervous. I had never performed in front of such a large audience before, and I had only presented this topic on a poster, and the short time frame was a challenge for me. But overall, the audience seemed interested, based on the many questions I was asked, and I received positive feedback from my topic leader, Eva Mikics, and from the group members. I felt the presentation part went well, although I could have given more specific answers to the questions if I hadn't been so nervous. So there is still room for improvement!

As you have to give a presentation in English abroad, this part is no more difficult at home, but it is different because of all the familiar faces.

The situation for Zsófia Maglóczky's PhD student Péter Szocsics is different. Besides "preparing" for his thesis and working in a clinic alongside his PhD.

- Officially, I only work ten hours a week at KOKI, and due to my clinical commitments, I am less able to participate in research these days. But in the four years since then, I feel I have learned and developed a lot, and I consider it an honour to present our research to the Institute's audience. During the preparation period, time was often tight, and I feel that this also influenced the final result. This made me nervous, but I feel that the presentation itself came together and I was able to say what I wanted to say.

As the KOKI community is of a scientific standard comparable to a 'normal' conference, the expectations are similar, so I don't feel that it makes a significant difference whether I have to present here or elsewhere.

Among the PhD speakers were two girls, one of them Anett Schwarcz, aka Netti, a PhD student of Ádám Dénes and Csaba Cserép.

- As a student, I have participated in KOKI days as a PhD student and I always felt that the atmosphere was very friendly and supportive. This time as a lecturer I experienced the same, despite being terribly nervous. It was reassuring to see the encouraging and curious eyes during my presentation, and by the end I was really enjoying it. I was very glad to be the second speaker, so that the stress was quickly relieved and I could listen to the rest of the lecture in peace.

Ákos Babiczky was a TDK student in László Acsády's group, then with his current supervisor Feri Mátyás, now a PhD student at KOKI.

- I always have a lot of fun at such social events at KOKI. I also had a great time here as a PhD student, but later I worked at the TTKI. This year we are back here and I am very happy to be part of the KOKI community again.

Although I'm not usually very nervous, this time I rehearsed the presentation thoroughly, which was particularly reassuring, although I was still a little apprehensive about the questions and discussion. Fortunately, I was asked some really interesting and answerable questions, so this part went well. And after the session, I received positive feedback from everyone, which I was particularly pleased about! I didn't surprise Feri too much, as we went through what I was going to say, but we always get praise if we did something right, and we always discuss mistakes. This was no different.

Kinga Müller, a PhD student of Norbert Hájos, also had a good time in Várgesztes.

- I was glad that after a two-year hiatus there were KOKI Days again. As I had never presented in front of so many people before, I started thinking about it at the end of August, collecting data and results. Luckily, as the fourth speaker, I was already on the first day, so I didn't have much time to worry. I stood behind the podium thinking, this is a great, interested, accepting community, nothing can go wrong here and now. This was borne out by the questions asked of me and others, and the conversations that sometimes ensued. For me, the biggest lesson was that if I prepare properly for the presentation and the questions, there is no point in getting nervous beforehand.

Bálint Király's performance did not show it for a moment, but he had his problems.

- Perhaps the biggest challenge was to be able to present a rounded story in 10 minutes in a comprehensible way and to arrive at a well-supported conclusion. I was a bit nervous about that. I received a lot of questions and positive feedback, and my supervisor, Balázs Hangya, was also pleased, so I hope I managed to complete the task!

Feedback like this is very good for you, as it is an important confirmation that the work that Vivi Pillár and Balázs and I put into this research is worthwhile.

A young person, especially when attending an event for the first time, will notice a lot of things that a first-time attendee might not. And since the primary aim of the event is to improve the efficiency and quality of research, let's first see what people think about it.

Laci Szente: The feedback shows how relevant the topic is, and also how clearly we manage to understand our results with colleagues from other fields.

Netti: I think these sessions are very useful in many ways. On the one hand, it is a very good training opportunity for young researchers in terms of presentation style and concise, to the point answers. On the other hand, it is good to see the work of other research groups, from which we can gain interesting and new information and get oriented on who to turn to in our own work with a particular unanswered question.

Kinga: It's also useful that a presentation shows researchers interested in the topic who else can contribute, who else can be discussed and thought about!

Peter: It is useful to have this symposium, it has a community-building function. I wouldn't change anything much, the only thing I felt I couldn't pay attention to was the session on Thursday evening.

Bálint: The KOKI days are a very good opportunity for students to give presentations, which is rarely possible at other conferences. This is not only very useful in terms of gaining experience (in a "home field", which is perhaps a bit easier), but it also gives a more direct insight into the actual work behind the results. This was also perhaps the most interesting thing about the KOKI days, to get to know exactly what other people are working on in their neighbouring labs. Várgesztes provided a super environment for this, and I had a great time.

If I had to say one thing I would change, it would probably be that the science program is too dense for my taste. Perhaps it would be enough if each group could delegate only one speaker and have a bit more time to introduce and discuss the topics -- especially considering that there is a wide range of research going on at the institute.

In addition to the lectures, the Institute's management also planned other activities and programmes, but the weather had some influence on their implementation.

Richard: The professional programme was great again; it was well organised and the temperature in the auditorium was right, which we had problems with before. However, the area in which the poster session was held was not, in my opinion, suitable!

Netti: The previous KOKI day in 2019 was very good for joint sports. I regretted that the weather did not allow it this time either, but I think that the location in Volga is not only a place for outdoor sports, as you could also organize pinpong, foosball, darts tournaments, which could not only help to get to know the group members better, but also to work together in the future.

Ákos: I think it's important that such an institution has some kind of community life, which KOKI has. I think these events are usually very successful, so there is very little need to change!

We end our review of the XXIV Scientific Symposium of the Institute with the words of Professor Angus Silver, which concluded the event.

"I was impressed by what I saw at the KOKI event. The depth, diversity and quality of the neuroscience topics presented, from molecular interactions to synapses, microglia, circuits, behavioural studies in health and disease.

From the presentations, it is clear that the tradition of quantitative neuroscience remains strong, with passion for scientific discovery is alive and well in the next generation of neuroscientists. There was a good balance between scientific studies using impressive cutting-edge technologies and those using approaches that have been tried and tested for a long time. I was particularly impressed by the clarity of the presentations by PhD students and post-docs. It is clear from the comments from the audience that KOKI is a supportive environment for young researchers. Overall, my impression of the meeting was that it provided many examples of quite excellent, exciting, wide-ranging science in a supportive scientific environment." 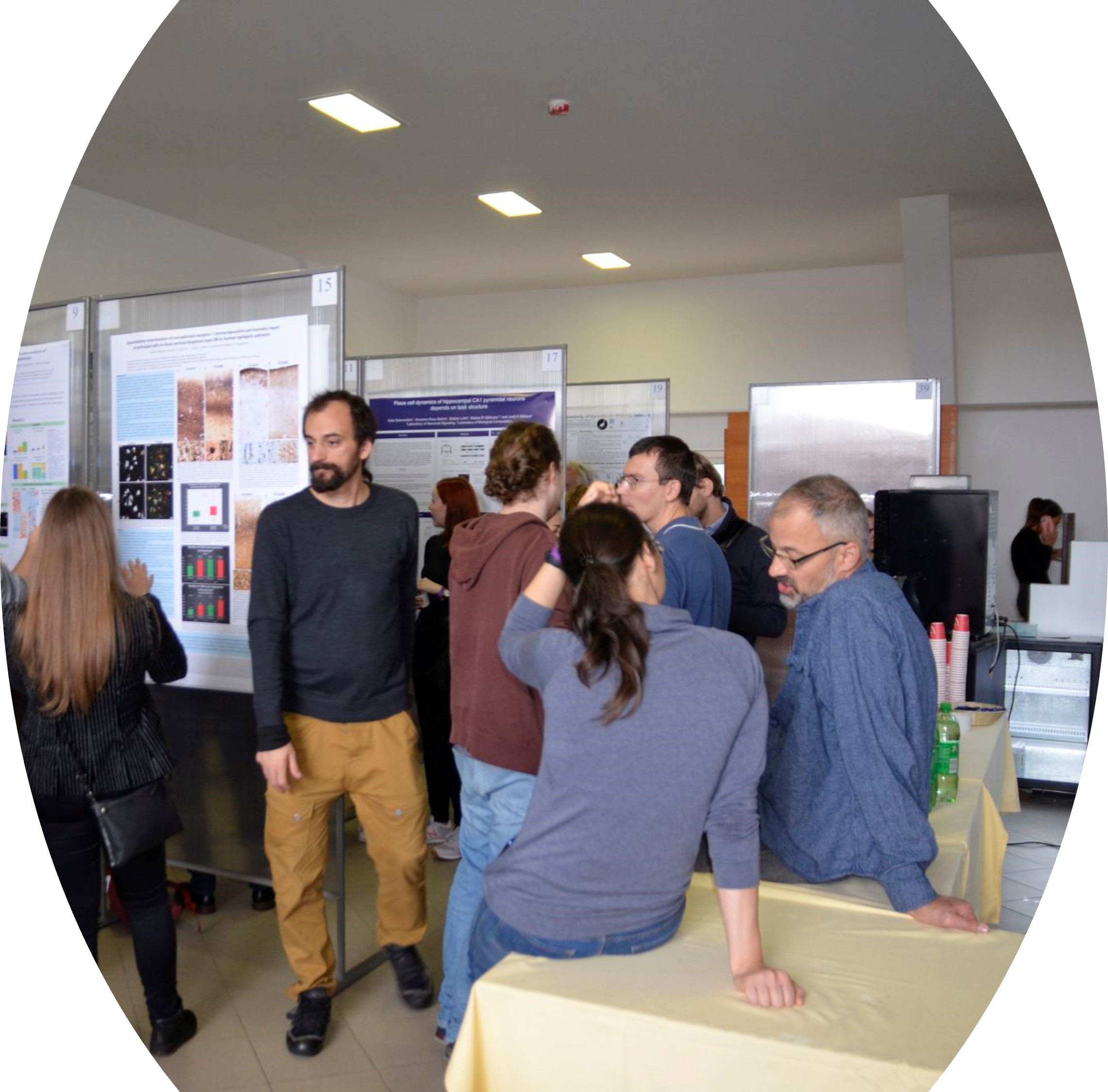